Good Friday.  The day we set aside once a year to commemorate the death of Our Lord for our sins and the opening of the gates of Heaven for our salvation. We remember God, who took on human nature and all of it’s messiness in order to spend eternity with us, His beloved children, and His beloved bride, The Church.

What if we thought of Good Friday as a a wedding feast in conjunction with Christ’s sacrificial love?  In his book, Jesus the Bridegroom: The Greatest Love Story Ever Told, Brant Pitre examines the actual event of the crucifixion in the light of historical Jewish wedding.  He places Christ as the Heavenly bridegroom and the Church as His eternal bride.

In an earlier post, I wrote about how Christ yearns to be intimate with us, emptying Himself into something so simple as bread and wine so that He can physically be within our very bodies.  In Mass tonight, the Homily focused on Christ’s desire for us to know God – to be intimate with Him.  Not just to know about Him, but to really know Him as the most important thing in our lives.
In Biblical terms, the phrase “to know” indicates a physical relationship, or an absolute knowledge of the other. The Hebrew word is “Yada.”  John  W. Ritenbaugh in his study of the old testament Hebrew language wrote,
“At times, the Bible uses “to know” as a euphemism for sexual intimacy. Paul is not saying here [in Philippians 3:8-10] that he desires sexual intimacy with Christ, but that he greatly desires spiritual intimacy with Him. He wants to be so close to Him that he experiences the same level of life as Jesus did—even to the point of suffering or dying as He died, if that is necessary to be made like Him in every possible way. He desires to glorify God in every aspect of his life just as Jesus did.”
In Joshua 23:14, Joshua gathers the people to tell them about their relationship with the Lord.  “Behold this day I am going into the way of all the earth, and you shall know with all your mind that of all the words which the Lord promised to perform for you, not one hath failed. ”
In Luke 1:34, Mary’s eternal virginity is emphasized with her lack of previous intimacy and full knowledge with any man. “And Mary said to the angel: How shall this be done, because I know not man?“ 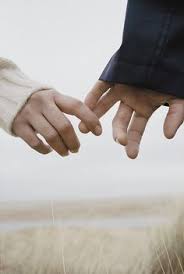 Christ desires to be intimate with us.  To have absolute knowledge of us.  In John 17:3-4, He prays to the Father before His passion. “Now this is eternal life: that they know you, the only true God, and Jesus Christ, whom you have sent.  I have brought you glory on earth by finishing the work you gave me to do.”
And what is more physical than Christ’s passion and death for our salvation?  He is betrayed with a kiss from a close follower, and then goes through the most physically excruciating death imaginable for a person in the fist century.  He is covered in His own blood, the physical life of His body (and the spiritual life of ours), and drags a wooden beam through streets crowded with the jeering of the souls He is on His way to die to save.  His body is fastened and hoisted in the sky, where He physically must thrust Himself up to fill His lungs.
All the while, He thinks of you.
And when the crowds yell at Him to come down from the cross and prove that He is God, He thinks of you.  “I can’t come down from the cross.  I have to stay up here for (insert your name) because one day, even if it’s over two thousand years in the future, they are going to need me.  And how can I teach them of the beauty of suffering if I give up now?”
And then, “It is finished.”  There is a spear thrust into His heart that is so full of overflowing love for our soul despite how much pain we have caused Him that blood and water flow from His side.
Brant Pitre points out the significance of this final physical aspect of Christ’s death. “So the Lord God caused a deep sleep to fall upon the man, and while he slept he took out one of his side (Greek pleura) and closed up its place with the flesh; and the rib which the Lord had taken from the man he made into a woman and brought her to man….so too Jesus falls into the sleep of death, and blood and water flow from his side (Greek pleura) And just as the miraculous creation of the first bride from the side of Adam is the foundation of marriage of man and woman, so the miraculous flow of blood and water from the side of Jesus is the origin and foundation of the marriage of Christ and the Church.” 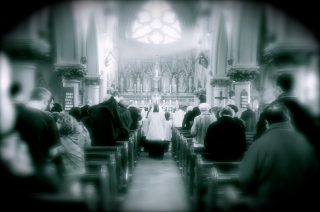 So Christ pours out His very life on the altar of the Cross on Good Friday, that supposedly dark day that ushered in the redemption of our souls from a debt that we could never pay off.  And the Catholic Mass taps into the eternal sacrifice at Calvary.
In The Faith of Millions, John A. O’Brien said, “The Mass is the renewal and perpetuation of the sacrifice of the cross in the sense that it offers [Jesus] anew to God . . . and thus commemorates the sacrifice of the cross, reenacts it symbolically and mystically, and applies the fruits of Christ’s death upon the cross to individual human souls. All the efficacy of the Mass is derived, therefore, from the sacrifice of Calvary.”
What will your wedding gift to Christ be?  A Sunday morning hour when convenient for you? He sacrificed His entire life for you…are you willing to do the same for him?

Lent.  We all know it, we all have mixed feelings about it.  But the truth of the matter is that, in a mere thirty five minutes, Lent 2015 starts.

What’s the point?  Why not eat meat, give extra money away, pray more and toss the Alleluia and Glory to God out the window?

We’ll walk around with ashes on our heads and a little spot in our hearts wishing that Easter was already here so we could indulge in that chocolate that we’ve been craving all week.  And let’s not even talk about the Catholic phenomena about how McDonald’s hamburgers never sound good until a Friday during Lent.

But if it’s all just mortification and the ever present message that we’re going to die some day in the not-so-far future, why even do Lent?  It can be depressing, and the weight of the sacrifice can feel incredibly heavy sometimes.  And if it’s all for naught anyway, why even bother.

I’ll let someone with a much more rich theological knowledge help out:

“Through fasting and praying, we allow Him to come and satisfy the deepest hunger that we experience in the depths of our being: the hunger and thirst for God” – Pope Benedict XVI. 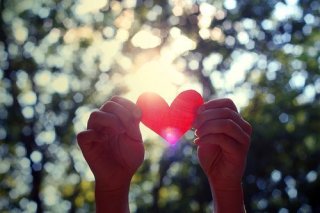 We crave love because there is an infinite and fulfilling love out there, ready to take our souls by storm and turn our lives upside down with His passion for us.

A passion and desire that God has for us to be with Him that is so great that he He wants to consume our very lives with it’s power.

Not just six hours of our lives until Easter.  Don’t let your lent become something you do when it’s convenient or when you happen to be at Mass on Sunday.

God is crazy in love with you.  And not the feel good warm fuzzy love.  The beaten to an inch of his life, thrown down and nailed on a cross, take every sin that was and will be onto his soul and lay it all out for YOU.

God thinks you are worth pursuing.

And what a beautiful opportunity Lent is – the chance to connect your suffering to the cross and relieve the burden of sin from Our Lord’s back!  The beauty of a crucifixion that exists outside of the human concept of time is the ability that we have to connect our suffering to Christ’s as He hangs on the cross for you.

Don’t let this Lent pass you by.  Don’t sit in the pew on Easter morning and think “Man, Lent went by fast this year!  I missed the chance to do anything…again.”  Seize this Lent as a chance to become a better version of you (thank you Matthew Kelly) and become fully alive.

“The world offers you comfort but you are not made for comfort.  You are made for greatness.” – Pope Benedict XVI.

Let’s make this a GREAT Lent.