More than I ever thought it could have been, my dating fast has been such a blessing – irony of ironies –  becuase it has let me really focus in on what relationship looks like with an objective point of view.  I was thinking about this quite a bit today while I was running – because, face it, the best thinking is either on the treadmill or in the shower.  Let’s be real. What are some of these thoughts then?
I don’t want a man to need me.
I don’t want to be the reason a guy goes to Church.  I don’t want to be the middle man (or lady) between a man and the Lord.  This isn’t to discount the beauty of marriage and willing the good of the other as other.  But to be needed? No thanks.  It sounds harsh, but let me explain.
Let’s say a man needs me emotionally. What would happen when he doesn’t need me anymore? When I’m not the reason that he’s standing, he can lean weight back on his own two feet and I become the pair of crutches that he needed until things got sorted out and healed? Or if a relationship with me is the substitute for what he really needs?
Because he doesn’t need me.  He needs God.
I’m not the one who has seen him at his worst and still can make him whole.  I’m not the one who created his soul and who began his existence in his mother’s womb.  I’m not the one who can forgive all his sins with a single word, and welcome him with open arms and unconditional love.  But you know who can fulfill all of that and more?

Colossians 2:10 has a beautiful answer to that question.

Yet not wanting to be needed is a two way street – I don’t want to need him either.

Whether that be the elusive him, the could be, who I ‘need’ in my life before I grow in my faith life…or the actual him who pursues me.  I want who I am as a child of God to be defined without him.  Because when two incomplete, half-people marry each other, they don’t complete each other.  They are just two halves that are struggling to find out who they really are.  I don’t need someone to complete me, because that is my maker’s job.
I don’t want to be defined by the need to be needed.  My definition of who I am is found in the fact that I am child of God.
What does this all boil down to? A healthy relationship is a relationship that is built on the basis of an identification in God.  You are not defined by who you are with or who you aren’t.  You are not the sum of your failures, weaknesses or needs.  You are summed up by the Father’s love for you. (JPII).  Don’t fall in love with the idea of being needed by someone.  Don’t be in a relationship just because you don’t want to not feel lonely. The healthy relationship is one that works like a triangle.  You’re common need is not each other, or affirmation, or affection.  Your commonality lies in the common goal of God and eternity with Him. Each side of the triangle (both the guy and the gal) are working towards a commonality that is not themselves and is not each other.  Instead, they are working together towards a greater good that is outside themselves and requires sacrifice.  That’s what marriage is – not someone fulfilling your needs, but instead you both bringing each other closer to the one who is the author of love. 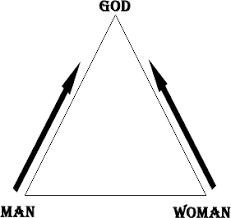 Don’t need someone.  Don’t be needed. Instead, find your identity in the unmovable.  Feelings change.  Needs Change.  Wants change.  But the Lord? Not so much.  In fact, Hebrews 13:8 says, “Jesus Christ is the same yesterday, today, and forever.”  That sounds like a constant to me.
Thoughts? I’d love to hear what you think on the subject.
In Christ,
Chloe