Living while you’re young?
The twisted message of YOLO

“I never thought I would do that with you….but I guess I’m only young once.”

The hip, modern term of YOLO (you only live once) is never followed with something that makes your life better.  You’ll never hear someone saying, “I’ve decided to go to Mass everyday! YOLO!”  It is usually followed by something that translates into: “We’re young.  We’ve got our whole life in front of us.  It’s ok to commit some major sins, we might as well get it over now, right?”


Wrong.  In fact, it couldn’t be any more wrong at all.  Look at the messages the world is pushing at us.  Immorality.  Immodesty.  Disrespect.  Hatred.  To prove the point, let’s look at the hit songs of the summer:

“Last Friday Night.”  Without going into the offensive lyrics too much, Katy Perry encourages her listeners to go crazy, dance on tabletops, max out credit cards, and give yourself physically away to a stranger.  But it’s OK, because you are drunk and won’t remember it all.  Right? 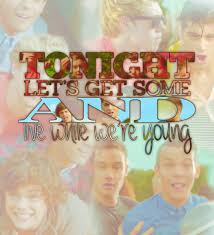 One Direction sings about getting “some” and living like we’re young.  What exactly do they want “some” of?  Hint, it’s not skittles that they are singing about.  Using youth as an excuse to be impure shouldn’t be something we scream and sing about when some British boy band comes on the radio.

Ah, Justin Bieber.  He sings about monopolizing a girl’s time while dancing around scantily clad girls at the swimming pool in the music video.  What exactly do seemingly most girls see in this guy?


Songs, media and peers will influence us to live while we’re young and do whatever feels good.  They also say you don’t have to worry about improving your faith life – there is always time for that when we’re older, when we have more time, and it can wait ’til later.

What if you don’t get a “later?”  God is wanting us to live with eternity in mind.  That means realizing that everything we do should be done for the glory of God.  Live everyday like it is your last.  We are loved by a God who will send His son back to earth one day.  It could be in two hundred years….it could be in two weeks.  Live with a knowledge of that.

After all, you only live once, you know.

God bless you all!