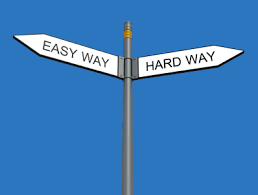 I have been thinking about this post for a long time.  It all started with a pro-life rally this Tuesday that my Dad attended.  In the crowd of pro-life supporters, there were four or five students from a high school across the street carrying pro-abortion signs.  One of the signs read, “Do gay babies have a right to life, too?”  This got me thinking.

Perhaps if we look at this situation in the light that all of us were born with original sin and a tendency to not choose God.  Without God, we can’t do it – we revert back to what pleases self.  With God we strive to become selfless and walk with Him.

Some people are born with a genetic predisposition to become an alcoholic.  True fact – they have addictive personalities similar to their family history and are predisposed to easily become addicted to things, particularly  alcoholic beverages.  But does this mean that they can wander around at three am in the morning publicly intoxicated with no reprimand?  I don’t think the officer who is arresting me is going to take my slightly-drunk version of Lady Gaga’s words as a valid reason to let me out of the handcuffs.

A pre-disposition is not a free ticket – actually the opposite.  It is an ability to see where you are weakest and avoid those situations.  If you are genetically pre-disposed to be an alcholic, perhaps you should avoid excessive drinking.  We are all called to avoid occasions of sin, regardless of our particular vice.

Each us is called to be pure.  ALL relations outside of marriage between a man and a woman is immoral and sins against God and His divine plan for our lives.  This is true regardless of sexual tendencies, gender, race, and age.

God has an amazing life planned for us if only we would say “No” to our plan and run towards Him – He has His arm wide open.