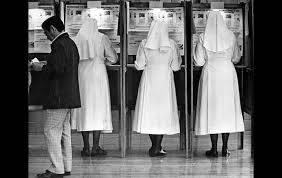 What’s a Catholic to do?
My thoughts on the presidential election

Tonight I watched the Presidential debate.  I really enjoyed the town-hall set up of things, and I drew some good points from the debate.

3) I’m a Catholic. So I side with my mother Church. So I (would) vote for Romney.

In my dad’s words:

“As I think about this week’s Mass readings and the upcoming election I have come to conclusion. Those Roman Catholics who voted for President Obama and are going to do so this year, you are spiritually dishonest. President Obama is pro-abortion, pro gay marriage and pushed the HHS Mandate on the Catholic Church(some Protestants also). So how do you sit in Mass every Sunday and listen to teachings that you personally oppose. Hypocrite comes to mind. The Church doesn’t force you to stay. Their are 30,000 denominations that preach your values. You obviously aren’t worried about obedience. The Roman Catholic Church isn’t a democracy. Never will be. So don’t continue being luke warm. Either you are obedient to the Church or you are not. Your souls are at stake.”
What are your thoughts on the presidential election?
God bless you all!