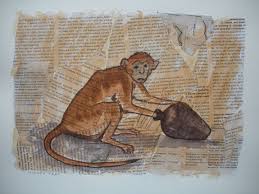 I have to share with you the homily I heard at Mass today:

In India and Africa they have a trick to catching monkeys.  The natives take a coconut and split in half.  After clearing out the coconut meat, they put an orange inside the coconut shell, cut a small hole at the top, and glue the halves together.
After the preparations of the coconut, they hide it in a bush or a tree and wait.  Soon, a monkey comes along, smells the orange, and sticks it’s hand in the coconut.  The monkey is able to get a hold of the orange, and attempts to pull it’s hand out – but it’s stuck!  The hole cut in the coconut is only big enough for just the monkey’s hand.  It is physically impossible to get the orange out.
Yet the monkey wants the orange so badly that it won’t let go, so the monkey is soon caught by the natives.
And if we were watching this on Animal Planet, we are sitting in our chairs and yelling: “Let go of the orange, you idiotic monkey!  Your going to die because your so selfish!  There are tons of oranges on other trees! Run! Run! Nope….too late.  Can’t say I didn’t warn you.”
Cool Story….what does this have to do with anything?

In the Gospel this weekend, Jesus is confronted by a good young man.  Really, this kid had it going for him.  He was smart, rich, a good Jewish man, and he wanted to know how to get into Heaven (don’t we all?).
Jesus says, “Follow the commandments.”  The young man replies that he had followed the commandments since he was young enough to learn them.  What else could he do?
Jesus then tells him to leave his earthly wealth and follow Christ fully.  The young man then turns around and walks away sadly, because he had many earthly possessions.
This man, like the little monkey, was so set on keeping his hand clenched tightly around his wealth that he wouldn’t let it go and be free.  Much like us in our recliners watching Animal Planet, God must be thinking: “Let go of the material goods!  Your selfishness will be your downfall!  Let go! Let go!”
Yet we’ll sit there, clutching our material goods (which we can’t take with us either way we go in the end, by the way) and we become so concerned over our earthly goods that thoughts of them take precedence over God in our lives.  And we are trapped by sin and the devil.  All we have to do is let go and give everything up for the glory of God.

So, the rich can’t get into Heaven?
Then the question arises if our material goods keep us out of Heaven.  Does this mean we have to give up everything and go live on the street? Nope.
If our material goods are hindering us from doing God’s work, then we have to stop and take a look around us.  Those who are financially sound can do so much good for the kingdom of God.  Like the parable of the talents – the servants who are willing to give their talents away, then find their talents mutliplied.  The servant who hid his talent then found himself trapped.

Thoughts or comments?  Let me know in the comment below!